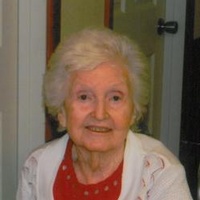 She and her husband owned a drycleaners, commercial laundry, and a convenience store in Dodge City for many years.

She is survived by her grandson, James E. Birney, and several nieces and nephews.

Graveside service will be held at Greenview Cemetery near Sulphur Springs, Texas on Saturday, August 30, 2014 at 10:00 a.m. Arrangements are being made by Tapp Funeral Home in Sulphur Springs.

To order memorial trees or send flowers to the family in memory of Sybil Edwards, please visit our flower store.