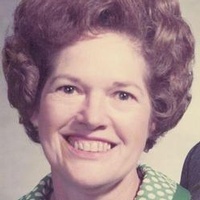 A funeral service for Ruth Milam will be conducted at Tapp Funeral Home Chapel, at 2:00 p.m., Wednesday, April 9, 2014, with Rev. Charles Moore officiating. Interment will follow at City Cemetery, with Stephen Beckham, Bill Campbell, Will Campbell, Drew Campbell, Phil Sartin, Jr. and George Terry serving as pallbearers. Honorary Pallbearers are Manjit Sandhu and Moni Sagoo. Visitation will be held one hour prior to the service (1:00 p.m.).
Ruth was born in Meadows of Dan, Virginia, on March 20, 1925, to Herbert and Oma Terry, the third of ten children. She grew up in Southern Virginia on a mountain farm. Following high school, she trained in Stuart, Virginia, as a practical nurse. During WWII, Ruth moved to Washington, DC, where she met the love of her life, William Kelly (Bill) Milam, who was enlisted in the US Navy. They were married on Dec. 30, 1944. Following WWII, she and Bill moved to his hometown of Sulphur Springs, Texas. They were the proud parents of Mary, Thomas Terry, and Virginia. They resided the majority of their 58 years together in Sulphur Springs. Ruth enjoyed photography and made numerous photographs of family members and vegetation. She was a talented cook and an avid gardener. Ruth worked for Steele Shoes, Cliff Anderson Shoes, and retired from ABC Pharmacy in 2000. Ruth will be remembered as a loving and devoted mother who adored her two grandchildren, Will and Drew. She was a member of First United Methodist Church of Sulphur Springs. She was preceded in death by her parents, husband, son Thomas Terry Milam, and her siblings, Clovis Terry, Rosalie Conner, Bernard Terry, and Lorna Hurt.

Ruth is survived by her two daughters, Mary Milam, MD of Fort Worth and Virginia Milam Campbell of Fort Worth; son-in-law Bill Campbell, of Fort Worth; two grandsons, William Benjamin Campbell, wife Cara and their daughters Winifred and Meredith of Columbia, Maryland, and Andrew Milam Campbell and wife Ramandeep of Carrollton, Texas; 3 sisters, Sybil Butler and husband Kelly, Mildred Koehler and husband Bill, and Guelda Skaggs; two brothers, Carl Terry and wife, Nellie, and Grady Terry all of Virginia; and numerous nieces, nephews and cousins.

The family wishes to thank her dedicated caretakers Joyce and Leroy Swindle of Fort Worth for all of their tender loving care.

To order memorial trees or send flowers to the family in memory of Ruth Milam, please visit our flower store.