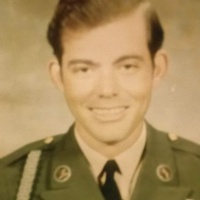 Funeral services for Roger Dale Moore, age 72, of Cooper have been scheduled for 2:00pm Thursday, October 11, 2018 at Tapp Funeral Home. Interment will follow at Peerless cemetery. Officiating will be Billy McQueen and Doug Overley. Serving as pallbearers will be Jeremy Jones, Chad Jones, Matt Dunn, John Phillip Robertson, Don Barrett and Sean English. Viet Nam Vets, John Simmons, Glen Stone and Michael Wilton will be the Honorary pallbearers. A visitation will be held Wednesday evening, October 10, 2018 at Tapp Funeral Home from 6:00PM to 8:00PM.
Roger was born in Sulphur Springs on March 28, 1946, the son of Honest and Pauline Moore. He married Melinda Wilton in Burkburnett, TX on December 28, 1971. Mr. Moore proudly served his country as a Sergeant in the U.S. Army. He was in “The Big Red One”, the First Infantry Division, E-5 platoon leader. He did one tour in Germany and two tours in Viet Nam where he received numerous medals including two Purple Hearts, and the Bronze Star. Roger was wounded on his second tour in Viet Nam and was a disabled Veteran. Roger worked for Northeast Texas Farmers Co-Op and for Grocery Supply Company and was the Baptist faith. He died on October 7, 2018 in Paris, TX.
Survivors include, Wife, Melinda Moore, of Cooper; Sons, Darrell Moore, of Cooper, Christopher Moore of Sulphur Springs; granddaughters, Destany Brown and Sydney Scantlen; Brother, Cecil Moore of Sulphur Springs and numerous other relatives and friends.
He was preceded in death by his parents, one brother, Buddy Moore; three sisters, Clydie Mobley, Juanita McQueen and Betty McQueen.
He was a very well known and loved by all, a very caring and giving man.

To order memorial trees or send flowers to the family in memory of Roger Moore, please visit our flower store.