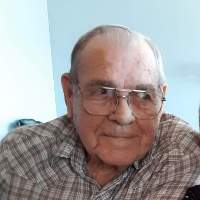 Funeral Services for Otto Dotson, age 86, of Cumby, will be held on Tuesday, July 16, 2019 at 2:00 PM, at Tapp Funeral Home with Bro. L.D. Baxley officiating. Interment will follow at Ridgeway Cemetery with military honors. Serving as pallbearers will be Doug Arias, Daniel Dotson, Eric Dotson, Issac Dotson and Koby Crump. Visitation will be held on Monday, July 15, 2019 from 6:00 to 8:00 PM at Tapp Funeral Home. Mr. Dotson passed away on Friday July 12, 2019 at Christus Mother Frances Hospital in Sulphur Springs.

Otto was born on August 7, 1932 in Muskogee, OK to Jack and Annie Dean Dotson. He worked as a dairyman and served in the United States Navy. He married Shirley Dotson who preceded him in death in 2012.

To order memorial trees or send flowers to the family in memory of Otto Dotson, please visit our flower store.