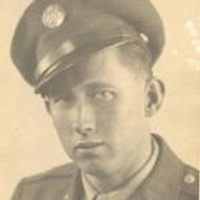 Luther "Tex" McCullough, Jr. was born April 9, 1921 in Klondike, Texas the son of Luther C. McCullough and Ida Fox. He married Billie Faye Attlesey on October 31, 1943 in South Beach, Florida. She preceded him in death in 1981. Mr. McCullough was a retired Journeyman Printer. He was a member of Reilly Springs Methodist Church. He was a long time member of the Dallas Typographical Union and Communications Workers of America for 60 years. He served his country in the United States Air Force at Molesworth, Cambridgeshire, England during World War II. He served as a "Hell's Angel" in the 303rd Bombardment group in which he flew thirty five missions as a tail gunner on a B-17 bomber combat team. Hopkins County Military Coalition will be at the graveside to conduct a flag folding ceremony as tribute to his national service.

To order memorial trees or send flowers to the family in memory of Luther McCullough, please visit our flower store.