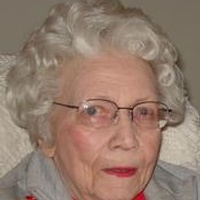 Loubeth Ramey Hames, 89, died August 10, 2013 in Ft. Lauderdale, Florida. She was born January 11, 1924, in Sulphur Springs, Texas, to Royal Rogers and Leta Mae Hamilton Ramey.
She was the valedictorian in 1941 at Sulphur Springs High School. She attended Texas Woman's University (TSCW), and Arkansas State University with a major in secretarial science. She was a member of United Methodist Church since April 1933 and was a lifetime member of United Methodist Women. She was also a member of the Daughters of the American Revolution.
Loubeth was an avid genealogist and a charter member of Hamilton National Genealogical Society, charter member of Yell County Genealogical Society, member of Lincoln County Tennessee (LCT) Genealogical Society. She published Robert Ryburn and Martha Peoples Ramey Ancestors and Descendants in 1977; Hames Heritage, Vol. I in 1980; and with Curtis G. Hames, Hames Heritage, Vol. II in 1992.
She worked as the administrative assistant for the Dean of the College of Education at Arkansas State University for 26 years, retiring in May 1991. She moved to Houston, Texas in October 1991 and to Ft. Lauderdale, Florida in December 2008.
Loubeth is preceded in death by her husband Roy Edward Hames, whom she married on September 5, 1943 in Denton, Texas, her sister Mary Katharine Ramsey, a niece, and two infant great grandchildren. She is survived by her sister Jean Hutton of Louisville, Kentucky, her sons Roy Edward Hames and wife, Janet, of Ft. Lauderdale, Florida and Ronald Eugene Hames and wife, Carolyn, of Spring, Texas, six grandchildren, Catherine Elizabeth Hames, Taura Hindsley, Russell Hames, Venita Carter, Eric Hames, and Renee Tristan, six great grandchildren, and four nieces.
Tapps Funeral Home in Sulphur Springs, Texas will be handling the services. There will be a visitation Friday August 16th at 6:00 until 8:00 PM and a graveside service Saturday August 17th at 10:00 at the City Cemetery in Sulphur Springs.
Loubeth requested in lieu of flowers, remembrances may be made to: Faithbridge (Missions) 18000 Stuebner Airline Rd., Spring, Texas 77379.

To order memorial trees or send flowers to the family in memory of Loubeth Hames, please visit our flower store.