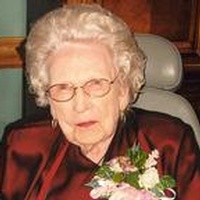 Services for GENOAH KNOWLES are scheduled for 2:00PM Tuesday, February 7th, 2012, at County Line Baptist Church, FM 275, Rains County, Rev. Wayne Darty officiating. Burial will be in Pippin and Hill Cemetery, south of Miller Grove. Visitation with the family will be at the church one hour before the service.
Mrs. Knowles died Saturday afternoon in Renaissance Hospital, Terrell.

She was born May 25th, 1918, to the late John Claude and Lula Genoah Bird Branom in Cumby, Texas. She graduated from Cumby High School in 1935 and graduated from East Texas State Teachers College, now Texas A & M at Commerce, in 1939 with a Bachelor of Science in Art & Music. Later she received her Master's Degree in Education in 1961 and an All Level Librarian Certificate in 1979.

Mrs. Knowles taught public school for 50 years. She taught in Cumby, Sulphur Springs (where she was the Jr. High Football coach during World War II), Dallas, Emory, Point, but mostly in Greenville's elementary schools, (18 years in elementary music and 6 years as an elementary librarian). She retired from active teaching in 1984, and continued to substitute teach for 11 more years, for a total of 50 years teaching children.
Mrs. Knowles was one of the Greenville Music teachers to observe National Music week with an elementary school Music Festival from 1962 to 1977. Because of her artistic abilities, she was also responsible for the stage decorations. She was twice given an Honorary Life Membership from Texas Congress of Parents and Teachers.

She married Lewis Knowles December 19th, 1945, after he returned from the Pacific theatre in World War II. They were married 50 years before his death in 1995.

She was preceded in death by Lewis, her parents, her brother Paul Branom, her sisters, Marguerite Lennon and Lula Mae Wilson, and her youngest daughter Kim Karal Knowles.

To order memorial trees or send flowers to the family in memory of Genoah Knowles, please visit our flower store.