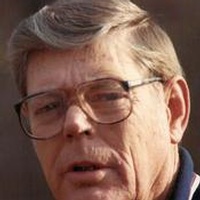 Claude Maurice Starkey, 84, died Wednesday, November 27, 2013 after a brief illness. He was born January 7, 1929 in New Baden, TX, the son of Claude Éclair Starkey, a railroad man with the Missouri Pacific Railroad, and Geraldine McCrary Starkey. As a young child he lived in San Antonio, and the family later moved to Franklin, Texas. As a teenager he lied (unsuccessfully) about his age in an attempt to enter military service during the later months of the Second World War. He eventually entered the US Army in 1946, where he proudly served as a soldier and a dental laboratory technician. He later studied at Baylor University in Waco in the pre-dental program where he met his first wife, Betty Lulu Bobo of Midland, Texas. Maurice completed Dental School at Baylor College of Dentistry in Dallas, and in 1956 he and Betty moved to Sulphur Springs where they raised four children. Maurice later married Carolyn Pounds of Yantis, Texas. Maurice and Carolyn lived for many happy years on their farm in Yantis, where they recently celebrated their 41st wedding anniversary.
Maurice was a lifelong resident of Texas. He practiced dentistry at 626 Church Street in Sulphur Springs for almost 40 years. He had great concern and compassion for his many loyal patients and would happily come to the office in the middle of the night to care for a patient with a bad toothache. He would always care for patients regardless of their ability to pay. He had a lifelong interest in history and genealogy and had a great appetite for reading historical novels. Even more, he had a great love for nature. He found beauty in something as simple as an odd shaped stone or the crooked branch of a tree. He enjoyed the art of woodcarving, and he had a great collection of hand carved walking canes. In his later years Maurice redeveloped his spirituality and love of God and established an extensive church family with the Lake Fork Baptist Church.
Maurice left his grieving family in the care of his loving wife, Carolyn of Yantis. His daughter, Melinda Odom and husband Randy of Rockwall and three sons, Dr. Tom Starkey of Fort Polk, Louisiana, John Starkey and wife Brenda of Wichita, Kansas and Matthew Starkey of Smyrna, Tennessee will forever miss their father. Maurice lost his brother Jerry and sister Fanney Melchior many decades ago. He is also survived by his younger brothers Don of Corpus Christi and Johnny of Franklin. He left this world to five loving grandchildren, Chris McGrew, Aaron McGrew, Elissa Starkey Graves, Sean Starkey and Nicole Ortiz and three great-grandchildren. Maurice lived a long, gratifying and mostly happy life and will be missed by all who knew him and loved him.

To order memorial trees or send flowers to the family in memory of Dr. Starkey, please visit our flower store.