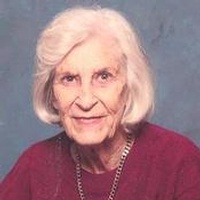 Funeral services for Dorothy Lee Watson, age 88, of Brashear, have been scheduled for 11:00am Friday, May 13, 2011, at Tapp Funeral Home Chapel with Evan Reed and Johnny Anderson officiating. Interment will follow in Brashear Cemetery with Larry Mabe, Landon Proctor, Dale Moore, Ray Watson, Justin Proctor, and Chas Use serving as pallbearers. A visitation will be held prior to the service from 9:00am to 11:00am at Tapp Funeral Home.

Dorothy Lee Proctor was born in Henryetta, OK on November 21, 1922, the daughter of O. D. Proctor and Verna McQueen Proctor. She married Leonard E. Watson in Hopkins County on June 7, 1941. He preceded her in death in March of 1988. She was retired as a seamstress from the Lee Jeans Factory. Mrs. Watson passed away Saturday, May 7, 2011 at Carriage House Manor Nursing Home.

Memorials may be made to the Red Cross.

To order memorial trees or send flowers to the family in memory of Dorothy Watson, please visit our flower store.